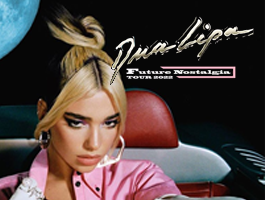 Future Nostalgia is the oldest album in the top 10 of Billboard 200, created by a female artist, and the most played album on Spotify. Besides that, the album is on the “BEST OF” list’s to Rolling Stones to Pitchfork. With a lot of success songs, like “Break My Heart”, “Levitating”, that stills on the music charts, and the platinum song “Don’t Start Now”, that’s brooked records for to be in the first place, for a lot of weeks, in the USA radios, and is the most transmitted song on Spotify history.

Receba no seu e-mail as principais novidades
e conteúdos do Distrito Anhembi.
We use cookies to analyse and customise our content and advertising for you. Browsing our site, you consent GL events to use cookies for these purposes. For more info, visit our Privacy Policy.
MORE INFORMATIONREJECT CONSENT
Manage consent